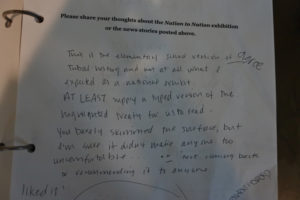 Figure 10. Visitor feedback at the NMAI shows engaged debate between visitors and also between visitors and the museum. This image also expresses disappointment at not being made to feel uncomfortable by the exhibition; indicating that expectations around museums (or perhaps at least some museums) have changed significantly in recent decades. Visitor’s Book at the exit of ‘Nation to Nation: Treaties Between the United States and American Indian Nations’ exhibition at the National Museum of the American Indian, Washington DC, 2017. Photograph by Kylie Message.