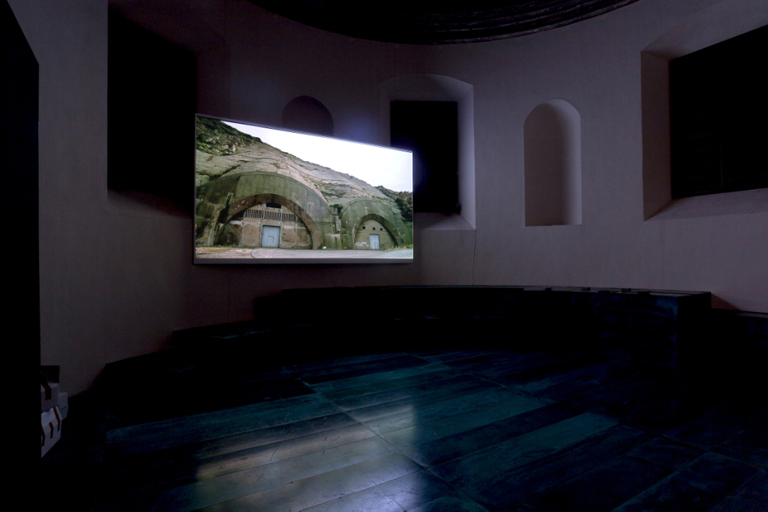 “Visibility is a trap” according to Michel Foucault. He wrote it in Surveiller et Punir, 1975.

What matters most in my work as curator and I guess in that of an artist, is the constant interrogation between what is visible and what is concealed, what is that can be represented and what is only imaginable, creating situations that both unsettle the conscience and provoke the will to question. I stress here the ‘will’, as I believe that any significant art piece (or cultural piece, for that matter) should not simply proposing to the viewer the dichotomy acceptance/refusal of an information (visual or narrated), but rather should facilitate the beholder to ask relevant questions by her or himself. Art should really ‘coach’ its viewers to train themselves in this, not proposing an alternative to an accepted worldview (or an invitation to go along).

Now, I have to take a step back. Because the work is one thing, but what lies before is even more significant. This is neither related to exhibition nor production, but it boils down to the construction of a space, relational and professional. This space, to put it shortly, constitutes a model, which stands on behalf of something. I think that a model can serve better our human perception on things that any form of claimed representation.

In a work that shifts the perception of things (being that an artwork or a journalistic report, or a mix of the two such in the ‘aesthetic journalism’ approach), the spectator is forced to experience the inherent rapport that we have with the subject of the work, say architecture, or violence, or whatever. The exchange between the spectator and the subjects is the result of an aesthetic, emotional, but nevertheless attentive encounter. To say it with Lauren Grasso’s words for his film ‘Silent Movie’ (which I commissioned for Manifesta 8 in 2010), mechanics of perception peak in the encounter of the principle of omniscience with the concealment (or withdrawal) of the image.

I cannot speak about other curatorial approaches, but for me it is quite clear that any piece or  communication effort does not aim to document or represent the themes invested in the author’s art. The sketchpad, camera or microphone acts as a tool of perception, placed in the centre of an ambiguous, ever-changing reality. A perception that, to work, must implicate a notion of desire, for desire plays a central role in our constructed version of reality. For instance, ‘beautiful images’ generate a tension between the physical accessibility of ‘what’ is investigated and the ‘instability’ of the representation. This tension gives way to a range of assumptions that possibly lead any piece toward semi-abstraction. It sounds bold to say, but I do think the more ‘subliminally abstract’ a piece of art, the more possibilities it offers to get closer to reality. I am not talking about abstract art; I am talking about a sort of ‘implicit abstract’, which can be devolved by the author as well as appropriated by the spectator, and can be actualized in whatever form.

I am not saying it is easy; I am saying is necessary though.