SPACE IS A DOUBT

We are never out of place, wherever we may be Interview with Raqs Media Collective by Silvia Calvarese

SPACE IS A DOUBT
We are never out of place, wherever we may be
Interview with Raqs Media Collective
by Silvia Calvarese 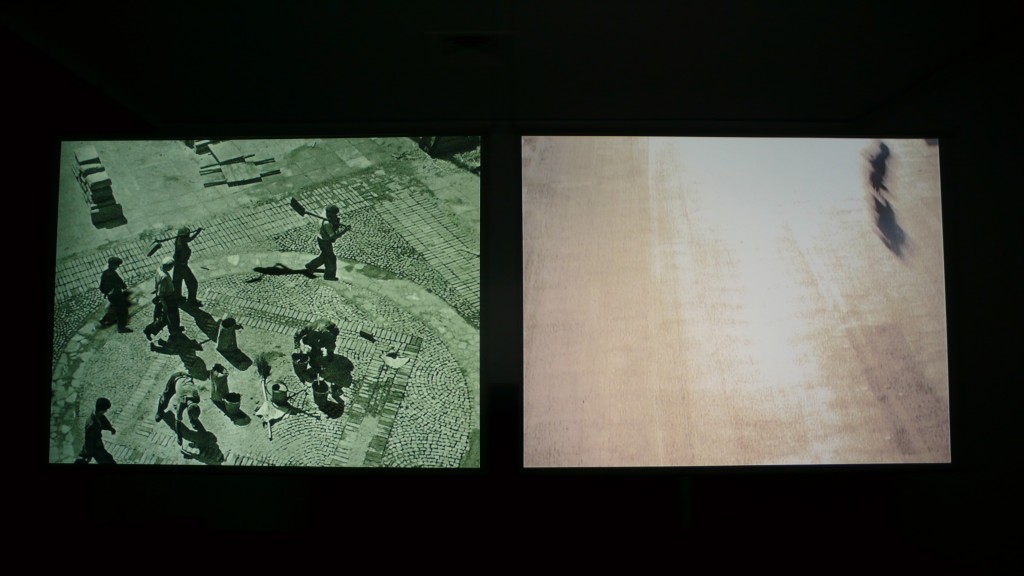 Silvia Calvarese: The quotation mentioned above is strongly connected to “Sarai.net”, the portal you are founder member of, since it concentrates on shared issues rather than on the individual, and yet it does not aim at homologation. Could You tell us about this virtual space? What are its potential, and how important is its taking place in Delhi?

Raqs Media Collective: Sarai’s brief history is a chronicle of multiplication. The name Sarai itself connotes a gathering of travelers, an intersection of journeys. It is both a physical space as well as a network of possibilities that have been archived and manifested online. We have been very committed from the very beginning (since 2000) to ensure that this plenitude is reflected in a diversity of trajectories. Many energies come in and go out of Sarai. They are touched by other energies. But nothing is assimilated into some undifferentiated space. Sarai has played a significant role through the past decade in inaugurating a whole host of practices in Delhi. And its potential will be realized as these practices flower. We see the world as changing, transforming, and Sarai as a space that is alive to this transformation, and an agent of this transformation.

SC: Unlike “physical” places, there are here several realities gathered together in one space only, and it makes the discourse space out. In this respect, is it about a global issue analyzed from different “local” points of view, or is it that each and every topic comes from local realities and they merge together in order to give shape to a new “global”, heterogeneous and shared topic?

Raqs: As we said above, Sarai is a physical as well as a conceptual space. And it is committed to transcending the false categorical distinction that privileges either local or global vantage points. The point is to think the world in every place, and to be committed to what is unique and distinctive in every part of the world. This means a certain ambidexterity when it comes to spatial commitments, a willingness to be both anchored as well as airborne.

SC: In your pieces of work you give much space to cities. You generally highlight their evolution and urban sprawl, as well as the concepts of centre and periphery. All this is analyzed through several kind of relationships: powerful, economical, human, in-human. People are masters of geographic and structural changes. In this sense, what type of relational dynamics most appeal to your work?

Raqs: We are interested in the relations between different times and temporal senses, between realities and imaginations, between quantities and qualities, between practices and between different descriptions and claims made by people on what it means to live and be alive. The play of forces between the human and the non-human is crucial to the way we imagine the critical possibilities of our times. We are a generation that has to think after the human world has lost it’s center in all kind of ways. To travel; to traverse through different surfaces; to create new possibilities of bonds and imagination – these are what we would argue is the exciting task that we aspire to propel.

SC: It’s impossible to think of “local” cultures nowadays. The idea of a delimited and undisturbed place is wrong on the inside of cities themselves. Even the identities of those places we struggle to defend are partially nothing less than the final product of a long history of relations with other realities, other “somewheres”. Untouched places are mind sceneries, imaginary geographies. All the places are intertwined and inter-dependent one with each other, and their faith is not determined only by innner happenings.

This being fragmentary leads at the same time to shorten distances and therefore to homogenization. And this is all a cause of the so-called Capitalism. Do You agree? And if so, what do You think will happen to the concept of “place”?

Raqs: We think that the concept of place can never be abandoned. It’s just that how we recognize place, and being placed, is constantly in flux. The ‘where’ of everywhere is a function, it varies depending on what it is being made to do, how it is being looked at, what it is seen in relation to. Place is an entity that derives in equal measure from entangled networks of productive journeys on the ground and imaginaries in the air. The fact that Capitalism shapes our sense of place, our understanding of limits and boundaries today in a certain very specific way does not mean that these will be understood very differently tomorrow. We look forward to the overhauling of all our co-ordinates of place, time and placeless-ness which will accompany the challenges that Capitalism have to face everywhere. Places will be thought more with a will to horizons than with a grief of territories.

SC: Let’s talk about “The Capital of Accumulation”. It is possible to interpret this work according to several levels. It narrates about cities where adults prevail, such as Warsaw, Berlin, Bombay. What do these cities have in common? In this video the “physical” borders often become blur and leave space to the temporal ones.

Raqs: Cities erases their temporal depth as they fetishize historical moments through heritage. Warsaw, Berlin, Bombay/Mumbai are cities shaped by the twentieth century. They have borne the brunt and ridden the wings of the twentieth century. They constitute (for us) a momentary constellation formed by our desire to follow an eccentric journey through a reading of Rosa Luxemburg’s ‘The Accumulation of Capital’. We follow the consequences of the accumulation of capital between and across these three cities and our tracks plays into obscure histories and enigmatic possibilities of flight. We are attempting here a lexicon that can speak to a conversation between places and their common futures.

SC: The careful consideration of the concept of “migration” is of basic importance in The Capital of Accumulation. The new-comer brings with him the powder of poverty, the ashes of war, the taste of hunger, plenty of scars. There is no happiness expectation in the steps of those who come in day by day.

Somebody talks of a “nowhere man”, using a word highly connoted with irony and ambiguity. Now-here, the present time and no-where, the absent place, the unreal and not existing place. It could be anywhere, near or far, given that we are not speaking of a physical “where”, but of the feeling of being home. “The immigrant is considered as a no-where man, a human being without a past who must be ready to accept the new life model and totally conform to it”.1

This thinking comes to my mind as it shows in the video about “the mountain falls on its knees, the desert becomes a mirage, the sea runs dry, the city opens its boundaries and gets wide”, a lot of metaphors that refer to the physical space and to people moving and migrating within it. Just like the woman, she “has a name that hides other names, and she is not eager to offer any explanation about herself”. Can you tell me about this passage?

Raqs: Those who come laden with dust and ashes through their desire transform the places they land on into reservoirs of hope, provided they arrive not as conquerors but as fugitives. That is why migrants renew old worlds and conquistadores destroy new worlds. We are free to choose the paths that earlier histories of migration and foraging have opened up. In our work, “The Capital of Accumulation”, we invoke the name and identity of a woman called Luxme Sorabgur in order to be able to trace the journeys of Rosa Luxemburg. One name twists and turns into another. That is a bit like a grateful traveller trying on a pair of thoughtfully left-behind shoes. Rosa Luxemburg used to say that she could change nationalities as often as she changed shoes, and she liked changing shoes. The traces of her journeys are marked by the way she could play at being in the world. Refusing to abide by the limits of what it meant to be a Pole, or Jew or Woman or Militant or Intellectual. That refusal to be contained in any way is what we aspire for in our practice. One can keep stepping into the shoes of the other in order to find one’s way.

SC: The end of the video highlights the fact that Capitalism is rather a social relation rather than an image. What is the right key to change things for better? Could it be random?

Raqs: The key (not the guarantee) to changing things for the better is an understanding that the way the world works under capitalism is not ordained by fate – that it is a product of social relations – which are themselves the product of human actions. And that if people act and relate differently to each other, towards history, towards power and the production of the material world these relations can change, and that even the most obstinately ‘clingy’ social formation can become like the skin that animals discard when they moult.

SC: It reminds me another your work, “Lost New Shoes”. The relationship between displacement (shoes), traces (what is left walking) and body (which continues to move). What is the importance of the things that are left, do you lose something walking?

Raqs: Things that get left behind remind ourselves of the histories of our journeys, and anticipate the fact that someday we will move on from wherever we find ourselves at the present.

SC: Do you want say more about Your Space?

Raqs: Our space is the world, and its secret passages. Our place is a corner, a ledge, a station. Our place is wherever we choose to make a sign, leave a trace, make cracks, create tracks. We are never out of place, wherever we may be.

The Raqs Media Collective enjoys playing a plurality of roles, often appearing as artists, occasionally as a curators, sometimes as philosophical agent provocateurs. They make contemporary art, have made films, curated exhibitions, edited books, staged events, collaborated with architects, computer programmers, writers and theatre directors and have founded processes that have left deep impacts on contemporary culture in India. Raqs follows its self declared imperative of ‘kinetic contemplation’ to produce a trajectory that is restless in terms of the forms and methods that it deploys even as it achieves a consistency of speculative procedures. The Raqs Media Collective was founded in 1992 by Jeebesh Bagchi, Monica Narula and Shuddhabrata Sengupta. Raqs remains closely involved with the Sarai program at the Centre for the Study of Developing Societies (www.sarai.net), an initiative they co-founded in 2000.