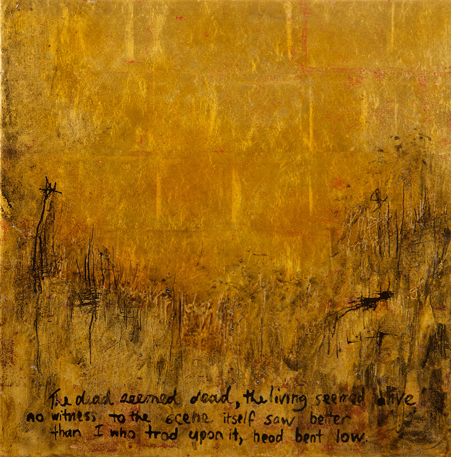 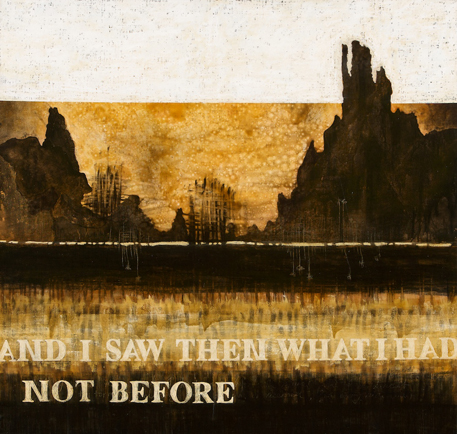 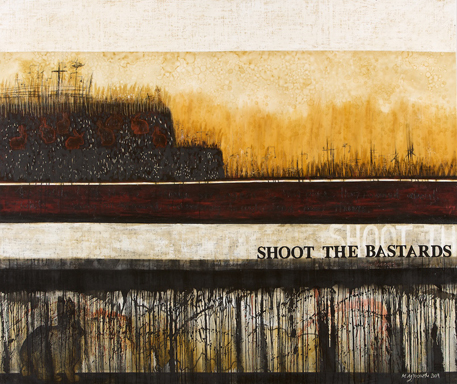 .The recent paintings, photographs and mixed media collages by Maree Azzopardi focus primarily on the Australian landscape, but it is as though she is gazing from a distance. It is like an amalgamation of her childhood memories, her strong emotions and the superimposed terrains from the many countries she has visited. Various citations, quotes, song lyrics and literary phrases overlay the scenery. A common thread linking many of these works is a horizontal line which bisects Azzopardi’s imagery. This central line serves to separate the sky and the spiritual universe from the strata of soil, layers of rock and the underworld.

“This series of works is about me connecting back to the Australian landscape,” says Azzopardi. “It’s a return to my childhood, traveling as a passenger in a car, looking out at the blurred scenery from the safety inside. Recently I’ve made similar car journeys in Malta and Sicily, but until now, I haven’t made such a trip in Australia since I was a teenager. The horizon is like a barrier, the middle line, with hills above and underlying layers exposed below, as if in a geological study. But it also functions like my visions of the different levels of metaphysical memory. The horizon becomes the fine line between growing wiser, or merely coping. It’s about staying on the road, not diverting from your path, literally following the straight and the narrow.”

In her large-scale paintings, limited to a palette of earthy tones, red, gold, black and white, Azzopardi depicts a ravaged landscape of scorched earth after a bushfire, a drought or a blitzkrieg. Plants, trees and telephone poles are scratched and etched, jagged as barbed wire, into the painted surface. Sometimes the scenes resemble a cemetery of crosses, accentuated by Azzopardi’s inclusion of texts using the same bold lettering of gravestones. These texts, reminiscent of Colin McCahon’s paintings of his biblical search for salvation, come from a variety of sources, including the visionary writings of William Blake, the songs of Johnny Cash and the descriptions of Inferno and Purgatory in Dante’s Divine Comedy.

Azzopardi’s melancholy landscapes are not the virginal territory of romance. She captures the hardened attitude of the laconic farmer or the returned soldier. “Shoot the Bastards” announces one painting. “The rider is dead” proclaims another. Using both the hurried scrawl of graffiti and the bold typeface of a printed Bible, Azzopardi scrubs through layers of paint, oil-stick and charcoal. “There are certain elements referring back to my growing up on a farm, listening to country-and-western music and the tough figure of my father. The ghostly imagery of writing also refers to the lyrics of older songs from my youth.”

Meanwhile Azzopardi’s photographic series entitled After the Storm (2009) stresses its cinematic origins. Dead trees, traffic signs and telephone poles emerge from the swirling, blue-green mist. This is the bleak and bleached world portrayed in the films of Ingmar Bergman. The chilled Swedish influence is further acknowledged in Azzopardi’s recent collages, in which she has hand-written the lyrics of songs by Katrina Nuttel on to her prints, highlighting phrases about sorrow and helplessness. Employing her renowned technique of crushing and then lacquering her photographs, Maree Azzopardi has created highly personal, multi-layered landscapes over which networks of creases crackle like bolts of lightning. 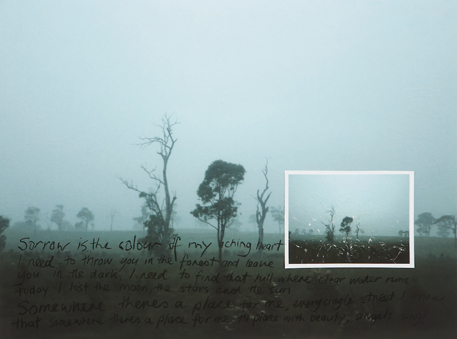 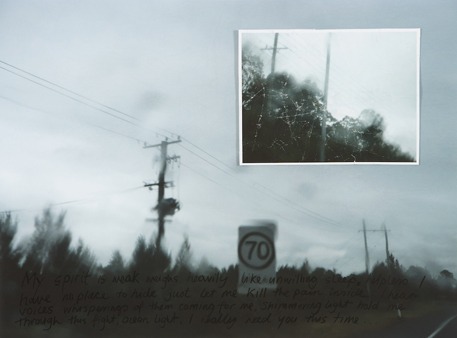 .
.
Maree Azzopardi is represented in Italy by Galleria Il Ponte Contemporanea in Roma.
In November 2012, her solo show of recent paintings and photographs titled I Walk The Line will be exhibited at Galleri Tapper-Popermajer, Teckomatorp (Malmo) Sweden.
www.mareeazzopardi.com
citazioneI Walk the LineJonathan TurnerMaree Azzopardi